Long time NDC stalwarts Nat Titman and Gareth Howell banged the drum for Nottingham Hackspace and bodily dragged the NDC crowd through an interactive session that had the room wielding marker pens with furious abandon!

We started with a lucid explanation of the Hackspace manifesto. If you didn’t know (I didn’t), Hackspace is a veritable Aladdin’s cave of cool tools and deadly devices available on the cheap for collaborative or personal projects. If you like the idea of getting your hands on a laser cutter or an angle grinder whilst simultaneously giving the finger to B&Q – get down there (click here). As an aside, if you had ever speculated about the origin of Nottingham’s very own tiny perplexed rabbit plague, speculate no more. It was those damn meddling Hackspacers!

Nat and Gareth are the local heroes behind the Hackspace Comics Making Group who meet on the first Thursday of every month to talk comics, make comics and eat comics (probably). Anyone with an interest in sequential art gubbins should check them out. They welcome artists, writers and fans of any calibre, inexperienced or otherwise. They emphasise an open, friendly environment for those wishing to experiment with making their own graphic narratives, and insist on an appropriate “comics/life” balance (‘comics ain’t the be-all and end-all of life, man’ – sage advice). They showed us examples of a few funny exercises they use for getting the ol’ grey matter warmed up. Daniel Zadik’s panel giving “Q” from Star Trek the cold shoulder and the exercise messing with the proportions of Leonardo Di Caprio’s face (turns out he always looks basically the same) spring to mind as providing much mirth. (To see more, N&G’s presentation to NDC can be found here.) 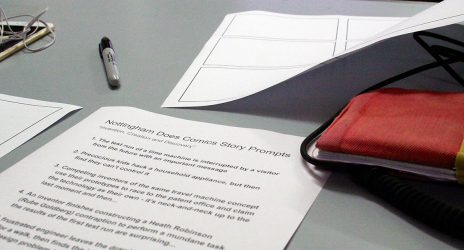 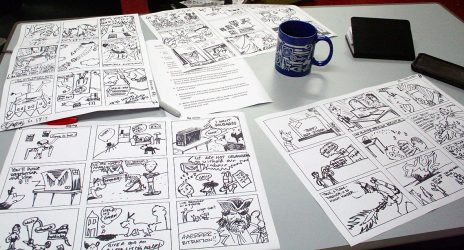 So, on to the meat and potatoes, the world famous – NINE-PANEL COMIC MAKING CHALLENGE!!!! First the audience was reshuffled to tables of not less than four people. N&G had come up with a list of genius pitches for a number of short comics stories. (The concept of “the pet translation device” deserves a trade paperback in its own right!) Then each table member was invited to pick a pitch to develop, no two of the same allowed on the same table. On pre-panelled A3 sheets, with the instruction not to use pencils and all use the same type of pen (provided),  a room full of aspiring comics creators set to with hammer and tongs, turning their neat pitches into the messy realities of Panel No.1. This was then passed to their left for the next budding Dave Gibbons or Hannah Berry to continue the story… and so on to Panel No. 9 and the totally unplanned but wonderfully bizarre climax of the piece.

What a great experience! At a table with three actual artists and two talented amateurs, I learned a lot about the difficulties of perspective, keeping a story moving and the narrative cul-de-sac of referencing obscure 70’s sitcoms with collaborators who weren’t born ’til this millennium! Surprisingly the group managed to knock out a few pages that actually hung together. Honourable mention must go to the “sick puppy’s” table, though. Every story they came up with inevitably descended into a degenerate nightmare of some kind – kudos to you!

However, rather childishly, my personal highlight of February’s NDC has to be Brick sticking his size 13 boot straight into the “gender-specific” toilet issue during his introduction! Brilliant!! Come on man, get with the programme….

Nobody tells me nuffin’! It’s what ‘appens when y’beard’s white…      Brick