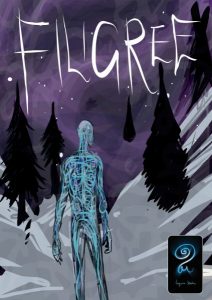 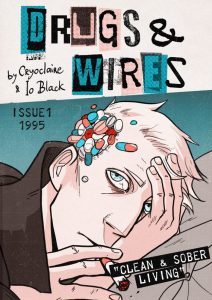 Our first speakers were Will Starling and Adam Willis, the creative entrepreneurs behind the recently published Filigree comic and fledgling Magoria studios, a newly formed but potentially exquisite beast hoping to plug a gap in the UK’s indie publishing market. They have an ingrained rapport that translated into an amusing presentation, provided interesting feedback on the decision making process they followed when establishing their imprint and the choices a young business of this kind has to make, such as relate to printing and branding.

Thankfully we also got to see lots of Adam’s ethereal artwork. The room responded warmly to their ongoing quest to publish cool stuff, and most were left both juiced up and dangling at the prospect of finally reading What Makes a God, clearly the Moby Dick of the Magoria world. Their presentation perfectly encapsulating the sometimes fractious but obviously fruitful relationship between artist and writer. Was this the 2017 equivalent of catching Stan Lee and Jack Kirby in the early days of Marvel? Let’s hope so? Will Magoria be at Nottingham Comicon (by the way – 14th October!)

Next, word from the wonderfully frank Cryoclare about her anarchic Gibson-tinged retro-tech web comic, Drugs and Wires, recommended for fans of downbeat science fiction and 90’s design aesthetic. Her presentation posed the question, ”Is making a web comic a good idea?” My personal response was “definitely not” as the level of technical acumen required is certainly considerable, but many of the group clearly took inspiration from Cryoclare’s practical  knowledge of Mastodon, Gravilix, Patreon and other techy things. Her passion for the medium was obvious and matched by her deep level of knowledge, it is clear there is much to learn here.

The relentless mechanics of drip-feeding a web comic to online hordes of quivering, jonesing net-heads seemed like a daunting task, but one that Cryoclare was definitely up for. In more familiar territory the group discussed the practicalities of doing the conventions circuit (if you didn’t know, Nottingham Comicon is 14th October at Trent University Newton Building). The old black and white .v. colour debate came round again, as did the joys of having fans tattoo your artwork on their skin (on this occasion, on their head…their head!)