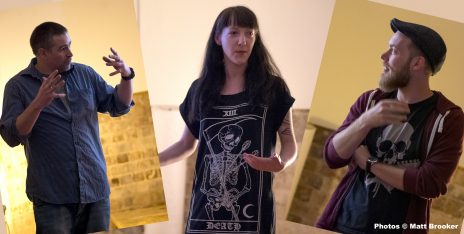 Will Starling (left) and Adam Willis are the writer and artist team behind Nottingham’s Magoria Studios which aims to become a publisher of indie comics and a hub for aspiring comics writers and artists. Their first comic, Filigree, was produced more as a taster and dummy run of the intricate processes of self-publishing. Their second outing, Drones, will soon touch down, and all that they’re learning about comics and process will see fruition in their forthcoming magnum opus, What Makes a God. Their Facebook page is here.

Mary Safro (aka Cryoclare) is a Latvian freelance comics artist/illustrator resident in the city. After five years striving in the gaming industry she has taken the plunge into self employment to focus on her comics passion. With writer Io Black, she publishes the exceptional on-line cyberpunk webcomic, Drugs & Wires, backed up by hardcopy compilations begun in 2015. You can find Drugs & Wires here.

Jay Eales has written, edited and published a variety of prose and comics, most notably The Girly Comic and Violent! anthologies, shortlisted for the British Fantasy Award (2009 and 2010). He was News Editor for the award-winning Borderline comics magazine (2002-2004), and co-organised Caption, Britain’s longest-running comic convention from 2006 to 2011. His work has been published by Constable & Robinson, Image Comics, Accent UK, Futurequake Press and Borderline Press among others.

Francis Lowe is the Course Director for BA Illustration & Animation at Coventry University (ranked No.1 in The Guardian university guide). Brought up on a diet of British comics and with a background in television and feature film animation, when he’s not doodling, he’s encouraging others to, and he never leaves home without his Moleskin.

Selina Lock is a writer, small press comics editor and publisher, and runs comics workshops. She edited and co-published The Girly Comic for ten years and co-ran the Caption comics convention for six. Her comic strips have appeared in anthologies like INK+paper, Asteroid Belter and To End All Wars and, for Five Leaves Graphic, she’s currently completing a potted history of 150 years of women’s contribution to British comics. 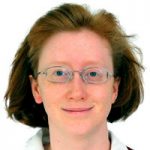 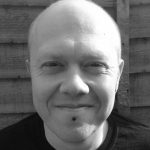 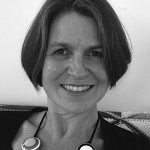 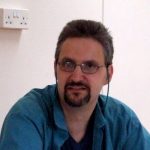 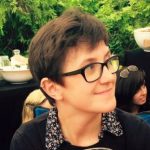 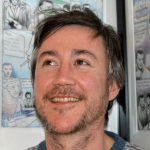 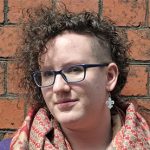 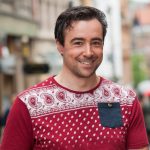 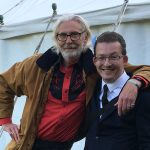 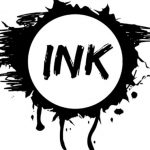 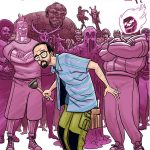 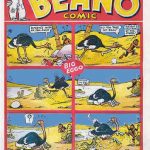 Chaz Wright is an obsessive reader of comics, a civil servant and totally outside the world of comics practitioners, but he is also our blogger.

Steff Humm is a writer and journalist specialising in literature and pop culture. After completing her MA in Multimedia Journalism in 2016 she founded the digital magazine Ink. Devoted to exploring the medium of graphic storytelling, its language, medium and art form, Ink also features long-form analysis of new and exciting titles, along with comics events from around the world. Ink’s website is here.

D’Israeli (aka Matt Booker) is one of our local comics stars and an Eagle Award winner (twice!), with a CV that ranges across Judge Dredd, Sandman, Ordinary and Tank Girl. He’s worked with Ian Edginton, Rob Williams, Neil Gaiman, Warren Ellis et al, and has done it all – script, pencils, ink, colours and covers. Having emerged from the indie world, he is a firm believer that there and in the world of self-published comics lies the R&D Department of the mainstream. His blog can be found here, but he’s that busy it hasn’t been updated in four years. 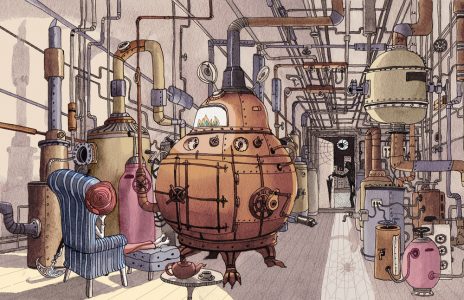 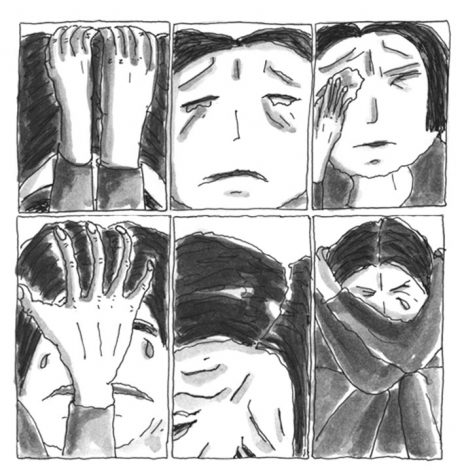 Carol Adlam is a locally-based illustrator and creator of comics who has been the artist in residence at the National Army Museum, Nottingham Castle Museum and Art Gallery, and at Nottingham University’s Lakeside Gallery. She has found a niche in creating fact-based comics for institutions as diverse as the Ministry of Women and Sherwood Foresters Regiment, exploring entertaining ways to pack in the information from months of research into the most reader friendly format. She is a prize winner and her work is regularly exhibited, most recently at the Inking Women exhibition at the National Cartoon Museum. Her website is here.

Nicola Streeten is one of the co-founders of Laydeez Do Comics, the talking shop NDC is based on. She is an anthropologist-turned-illustrator and author of Billy, Me & You (Myriad Editions, 2011) the first graphic novel to receive a British Medical Association award (2012). It was also the first long form graphic memoir by a British woman to be published. She is presently in the final stages of a PhD on The Cultural History of British Feminist Cartoons and Comics from 1970-2010 focusing on the role of humour in disseminating the feminist message. Her website is here. 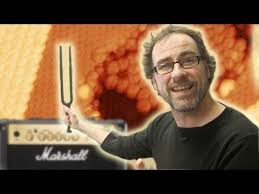 Philip Moriarty is a Professor of Physics in the School of Physics and Astronomy, University of Nottingham. His research interests span a number of topical themes in nanometre scale science with a particular current focus on single atom/molecule manipulation using scanning probes. Philip has a keen interest in outreach activities, primary and secondary education, and both science and higher education funding policy. In addition to participating in a number of research council-funded public engagement projects, he’s been interviewed by, and written for, The Independent, The Guardian, Times Higher Education, BBC Radio 4, Die Zeit, and The Economist amongst others. Although Philip doesn’t share his infamous namesake’s fascination with the binomial theorem, in his spare time he enjoys exploring the relationships between mathematics/physics and music.

Shey Hargreaves is a Norwich based illustrator with a love for science and intrigue. Since graduating from Norwich University of the Arts in 2014, she’s been producing work for a range of clients including Peterborough Museum and Jarrolds Publishing. Shey loves any excuse to illustrate the animal kingdom, slightly strange things, and rich colours, whether it’s for a client or a personal project, always gotta be drawing!

Charli Vince is an illustrator based in Norwich.

Brigitte Nerlich is an Emeritus Professor of Science, Language, and Society at the Institute for Science and Society. She studied French and philosophy in Germany and gained a DrPhil in French linguistics. After a postdoc in general linguistic at Oxford Brigitte moved to Nottingham. Her current research focuses on the cultural and political contexts in which metaphors and other framing devices are used in the public, policy and scientific debates about synthetic biology and climate change. She has written books and articles on the history of linguistics, semantic change, metaphor, metonymy, polysemy and, more recently, the sociology of health and illness and the social study of science and technology. She is a Fellow of the Academy of Social Sciences. 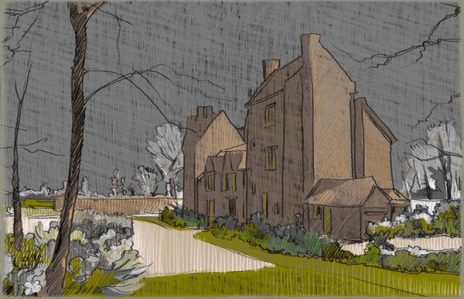 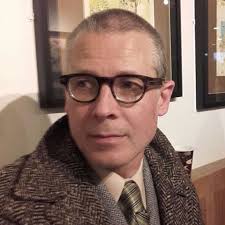 Simon Grenan on the art and pratfalls of adapting prose literature.

Dr Simon Grennan is a scholar of visual narratology. He is author of A Theory of Narrative Drawing (Palgrave Macmillan 2016), co-editor of Transforming Anthony Trollope: ‘Dispossession’, Victorianism and 19th century word and image (Leuven University Press 2015) and contributor to Representing multiculturalism in comics and graphic novels. (Routledge 2014) and others. He is the creator of Dispossession, a graphic adaptation of a novel by Anthony Trollope (Jonathan Cape and Les Impressions Nouvelles 2015) and, since 1990, half of international artists team Grennan & Sperandio, producers of over forty comics and books (www.kartoonkings.com ). Simon is Research Fellow in Fine Art at the University of Chester and Principal Investigator for the two-year research project Marie Duval presents Ally Sloper: the female cartoonist and popular theatre in London 1869-85, funded by an AHRC Research Grant: Early Career (2014). www.simongrennan.com

Three DIYers who gave our audience oodles of inspiration, ideas, encouragement and hope.

Kevin Brett – Kev is the driving force behind Nottingham Comicon, or rather Kev and his enterprising missus. He is also runs PiddleyPix and is the creator and publisher of comics for young readers, such as The Monkey and the Mouse.

Steve Larder – A freelance artist and illustrator, Steve is best know as the creator/publisher of indie-comics and zines like the excellent Rum Lad, now in its tenth year. A regular contributor to punk comic anthology As You Were, he is a fixture at small press cons (inc. Nottingham Comicon). When not locked in the fine detailing of his fabulous drawings, he’s busting eardrums with nefarious punk projects.

Adrian Reynolds – Comics are a lifelong passion for writer Adrian, but making them is a relatively recent adventure. Online sf comic Dadtown led to an approach by Under Belly Comics to do a collected edition in print form. He has just been featured in an anthology by publishers Darby Pop, and is in the process of pitching a series to them. 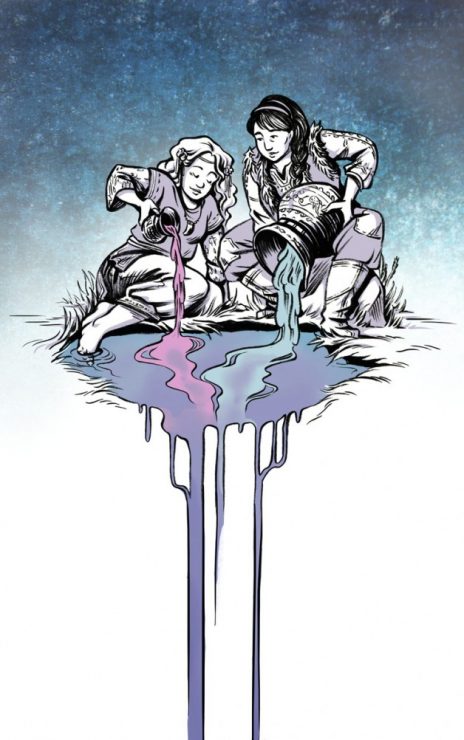 This was our second public meeting but first as a peripatetic group, which could become an irregular occurence. We formed a panel at Lowdham Book Festival to discuss ‘The Literary Art of Cracking Comics’, but since we would hope to invite each of our three panellists and the chair to speak at NDC in their own right, these introductions will be brief.

Matthew Green – Matt is an Associate Professor in the School of English at the University of Nottingham and an avid comics reader, commentator and champion. He has written extensively on two giants of the graphic form, Alan Moore and William Blake, often in the same breath. Matt’s university page.

Sally Jane Thompson – Based in Derby, Sally is a comics creator and freelance illustrator with a distinctively fluid style. The featured sample is her response to a brief that went, ‘The beauty of two different minds creating a thing of beauty’ (writer and artist, right)! Sally’s website.

Jonathan Rigby – Jonathan is a partner in the country’s best comic book shop (and it’s in Nottingham!), Page 45. He is hugely knowledgable and erudite about what’s out there and about to land, and his critiques for Page 45’s website and newsletter are to take note of. Page 45 website.

James Walker (Chairman) – James is the man about town for local literature; books editor for Left Lion, young gun on the Board of City of Literature, general of the inspired Dawn of the Unread reading and libraries project… and he teaches at Trent University! Dawn of the Unread website. 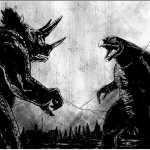 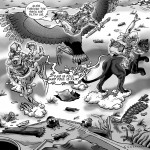 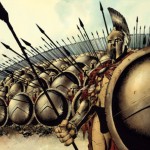 Jonathan Clode – Based in Cardiff, Jonathan was co-editor of double Eisner nominee, To End All Wars, the WW1 anthology, which he also contributed stories to. He has written several comics pieces for Outré, as well the extremely indie if not baffling  Night of the Fire-Beast. He is a freelance comics writer/researcher with a toe in the social care system which is informing his current magnum opus, a graphic docudrama provisionally entitled Shut Away. Jonathan’s Twitter.

BRICK – A freelance political cartoonist since 1979, Brick’s work has appeared in 16 countries and sometimes in the UK. Over 300 magazines and newspapers have carried his ‘toons, and he’s produced educational comics for UNICEF, Oxfam, Shelter and a raft of other ngo’s and charities. His books include the prose adventure travelogue, After the Gold Rush, a cartoon anthology of the Thatcher years, Too Much Pressure, and the comical ‘graphic memoir’,  Depresso, all about the fun of depression! He was the other co-editor on, To End All Wars, and his investigation into The Curious Case of Leonardo’s Bicycle is slated for release next year, the 200th anniversary of the invention of everybody else’s bicycle. Presently scripting a graphic novel about medieval madness. Brick’s website.

Lynn Fotheringham – Lynn is a Classics lecturer in the Faculty of Arts at the University of Nottingham. She’s studied and worked in different countries, did her Masters in Pennsylvania and her D.Phil at Oxford Uni. before shooting off to Dublin to teach at University College. Aside from her expertise in Ciceronian judicial oratory (always useful) and Latin (ditto, in certain places), she is fascinated with the classics world, as portrayed in comics. Her partner is Matt Brooker (D’Israeli), a 2000AD comics artist who has collaborated with her on both teaching and research. They travel whenever they can for her research – Vienna, Thessaloniki, and Gijón in Northern Spain most recently. With Matt, she has written papers about storyboarding epics. Lynn’s website.[/vc_column_text][/vc_column][/vc_row]