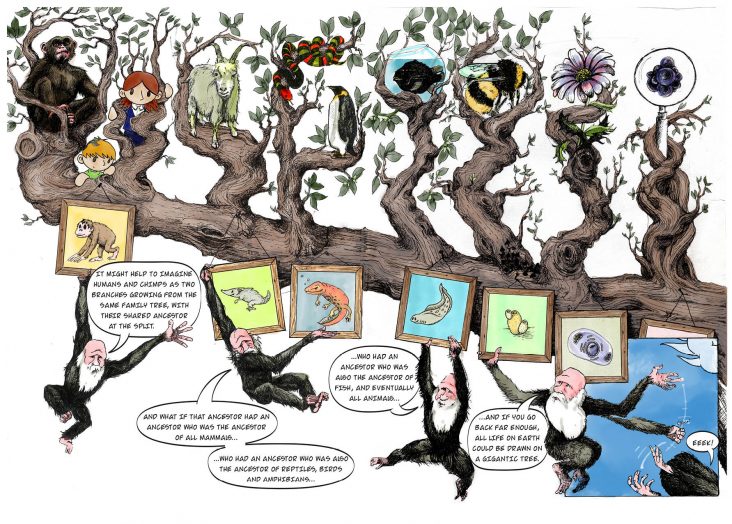 Part of NDC‘s brief is to encourage novices to have a go at making comics and to draw on the years of experience among our members to assist anybody working in the field who hits a bump in the road. An early example of this aspiration bearing fruit came the other evening when three creators from Nottingham’s Hackspace met Nottingham ‘toonist, Brick, to chew over qualms about a major educational project they’re undertaking to produce a young person’s comic that explores different concepts around the huge topic of Evolution. They’d done their homework – apparently Evolution is now a key element of the school curriculum.

The team of Daniel Zanek, Gareth Howell, Leigh Woosey and others not present had got to the point of producing a couple of double-spreads and an opening page, mostly to see if the thing had legs. In Brick’s eyes, it most definitely did, and you can judge for yourselves from the sample spread, itself one the lads felt needed extra work on the caricature of Darwin. There were other similarly small issues which came across as big in the team’s eyes, ones that a working comics creator would correct with little fuss rather than letting them get in the way of progress. There were notable problems with the realising of their opening page, though nothing that a clearer reading of the script wouldn’t solve, but the big stumbling block seemed to Brick to be that they didn’t have a finished script to work from.

Like so many new to the comics form, the team had been eager to crack on with drawing up what passed for a script thus far. It is something we’ve all done, particularly writer/artists who possibly find sitting at a keyboard typing text less than engrossing. But the Hackspace story features two children who are being led through the different concepts by Charles Darwin, and that means a relationship between the three is going to (nay, has to) develop, otherwise why bother with the kids? Equally, the opening panels are set in a zoo, but who knows what might be important to be seen in that collection of caged beasts that might emerge later in the unwritten script?

In a collective, there are ways and means of making the scriptwriting process as lively and interactive as the Hackspace boys have evidently found drawing up sample pages. Brick’s message to the team was find them and bang on with writing the darn thing, itself a major undertaking when they so readily acknowledge they have no ending and don’t quite know where the chapter episodes of the story are heading. Our man from NDC sent them a sample script, just to help with how they might lay it out for ease of readiing, and metaphorically gave them a boot up the behind. This is a fantastic project, one NDC would love to see come to fruition a couple of years down the line and one we will continue to provide roadside assistance to, if asked.