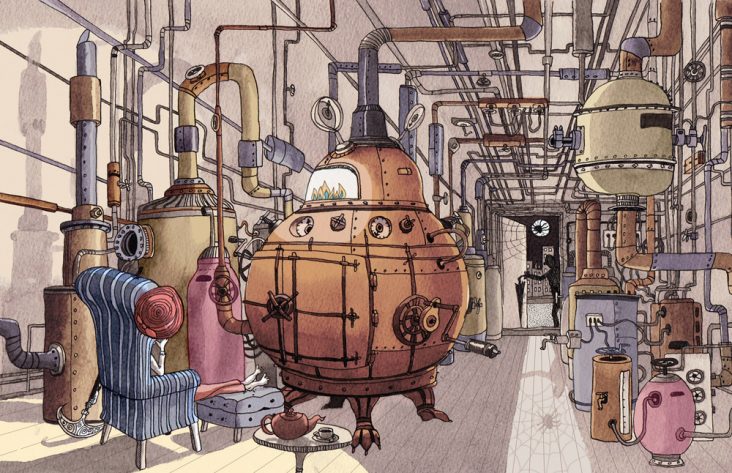 NDC member, Carol Adlam has been the Djanogly Artist-in-Residence at their Museum of Archaeology since May 2016. The results of her tenure can be seen from 25th November, 2017 – 25th February, 2018 at Lakeside’s Angear Visitor Centre.

The Thinking Room is a multi-layered graphic narrative project that incorporates visitor responses to the museum and its artefacts in a series of reportage illustrations, as well as in a short graphic story called Buried (In the Thinking Room). Both Buried and the overarching Thinking Room project draw on layered narratives, palimpsests, and the real historical narratives that have shaped the Museum and its environs today, from Roman Margidunum to medieval Keighton. Large-scale reportage illustrations and pages from her comic are on display in this exhibition.

Carol is a graduate of the Cambridge School of Art (2014). Her work was shortlisted in the World Illustration Awards 2015 and was nominated in the ‘New Talent’ (Research and Knowledge Communication) category in 2016. She has held residencies at Nottingham Castle Museums and Galleries (2014, 2015), the University of Derby, and the National Army Museum, London. She is the illustrator of the graphic anthologies Ministry of Women (2016), The New Wipers Times (2015), the short graphic novels Amy in Love (2016) and Suzanne’s Story (2014), and several children’s books. More of her work can be seen here.